Re-imagining Culture: How to (and how not to) build a cultural economy, A Foundation, London 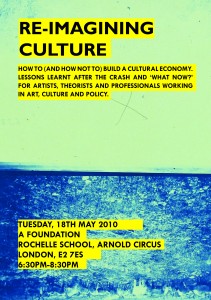 View videos from the event: here

‘Re-imagining Culture’ is a workshop in the form of an open discussion that aims to address the current state of the post-crisis cultural economy. The crisis forces us to confront multiple issues, and provides us an opportunity to reflect, undo and redo some of visions and practices of arts/culture, economy and industry. In the past decade, the culture industry in the UK has been regarded as a leading model that has been followed in pursuit by countries around the world.

The workshop looks at the impact of the crisis and provokes imagination from various perspectives of economy, labour, business and innovation in the UK, and projects it to a broader discussion on global landscape, especially on large scale cultural development projects such as the West Kowloon Cultural District in Hong Kong or the Saadiyat Island Cultural District in Abu Dhabi. The event aims to bring together artists, theorists and professionals to raise questions, to approach an understanding of the changes, and to re-imagine new possibilities and resolutions for the arts, culture and global economy.

‘Re-imagining Culture’ is the first of a series of workshop events produced by DOXA. The event is part of an on-going project on ‘Creative Space’, which seeks to explore new models, practices and ideas of culture, creativity and the global community.

Sonya Dyer is a London based artist, writer, cultural commentator and co-ordinator of Chelsea Programme at Chelsea College of Art & Design.Sonya’s practice incorporates writing, performative actions, public speaking, film and paper-based work, as well as curatorial projects and interventions into public discourses. She has written for publications including a-n, Art Review and Time Out London. Past projects include Current Thinking (Tate Modern) and Temporary Agency (Chelsea Space). She is the author of ‘Boxed IN: How Cultural Diversity Policies Constrict Black Artists’ (Manifesto Club/a-n) and numerous other texts on art, politics and arts policy.She is a member of a-n’s NAN advisory panel and on the board of New Work Network and recently contributed to ‘In Time,’ published by Live Art UK http://www.liveartuk.org/projects.htm.

William Wong is a strategist for creative cities and spaces. He was recently commissioned by NESTA to research on how leaders are driving new innovative business models in cultural organisations. The provocation piece, ‘@udi£nce-Inv€$tor: WE LOVE YOU’ will be launched and published later this year. He is a Clore Fellow and Visiting Fellow at the LSE. In 2009, he explored the linkage between the US$3 billion cultural hub in-the-making, the West Kowloon Cultural District in Hong Kong, and the city’s ambition to become an international cultural metropolis. William began his career as an accountant, then moved to international management consulting. He attended business school, which changed his perspectives. William champions corporate social responsibility. Wishing to learn the art of storytelling and mass communication, he retrained as a theatre director, which later led to his Clore Fellowship. William sits on the Imperial College Business School Alumni Advisory Board.

John Kieffer has over 25 years’ experience in UK and international cultural policy, arts management, arts programming, creative industries development, and the music industry. Throughout the late 70s and 80s John worked in arts and live music programming and production before joining the London Docklands Development Corporation as Arts Development Manager. In 1992 he was appointed as Director of Arts for London Arts. From 1997-99 he worked simultaneously as Programme Associate for Artangel and as the Director of the Arts Foundation. John then took up the role of Director of Performing Arts and Head of Music for the British Council, and worked as a consultant in the US and the UK from 2006 to 2009. In 2009 he edited’ After The Crunch’ with John Holden, John Newbigin and Shelagh Wright and continues to work with John3Shelagh on other projects, as well as his undertaking his role as Creative Director of Sound and Music. John was formerly chair of Artangel and is a trustee of A New Direction, and the BBC Performing Arts Fund, and an adviser to City University, Cove Park and Tate Modern.