Publication: From Living to Individuation (English/Chinese) 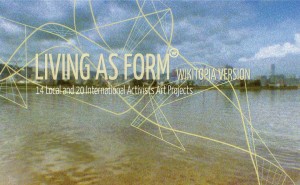 From Living to Individuation – reflection on a negative anthropology

What is an artist? An artist is an exemplary figure of individuation — understood as process of psychic and collective individuation where a ‘I’ is only inside of a ‘we’, and where a ‘we’ is constituted at the same time by the saturated potential and strained by the pre-individual background that it supposes….it is an operator of trans-individuation of available pre-individual: it creates the works, that is to say the artefacts… which typically open up the future as the undetermined singularity by an access to the repressed which contrives the power of the noetic soul as its possibility — which is only by irregularity– of passing to acts.

Why should one subsume living to a form? To pose this question is not to remove form from living, but to question the very notion of form itself. Today politics is becoming bio-political – meaning the productivity of capitalism penetrates more and more into our livings, not simply by buying off our physical force, or make us to buy commodities as Marx analysed in Das Kapital, but controlling our tastes, gestures, habits, genetic information, etc – living can no longer retreat to its own term. If here living as form is to identify such a resistance or vital force in an affective manner, I would rather like to follow Gilbert Simondon and call it individuation. The problem of form doesn’t lie on form per se but its attachment to hylomorphism since the ancient Greeks, notably in the philosophy of Aristotle.

According to Aristotle things can be conceptualised in terms of sensible form and matter. Sensible form is concerned with “what kind of thing” something is, and matter concerns “what it is made of.” Aristotle proposed to decide which of the three elements, form, matter, or the composite of form and matter, can be called substance. He rejected matter and the composite of matter with form, the ﬁrst because it can be a predicate of the subject, the second because it is “posterior in nature and familiar to sense” (1956). He decided that form is the sole understanding of substratum. The sensible form is nevertheless not a rigid form. In fact, Aristotle goes further than the Platonic idea/ideal and discover the conformation of matter to form a process that is pertinent to material, for example in brick making, the texture, moisture of clays affect the final products. Another theory of form emerged in 19th century following the “field theory” in physics, and actualized in the Gestalt psychology in the early 20th century(Simondon 2005). Gestalt psychology rejects the view that perception is made possible by association of different sense data, and proposes to see form as basic unit of perception. The psychologist Kurt Lewin further combined field theory, Gestalt psychology and Cybernetics to develop his social-psychology populated in the 40s and 50s in US.

Simondon’s theory of individuation was very much influenced by Kurt Lewin, while he also attempted to go a step further. Simondon contested the separation between individuals and collective in the studies of psychology and sociology, to simplify Simondon’s argument: psychology sees the collective as the extension of the individual, while sociology sees individuals as the products of the collective. For Simondon, individuation is always at the same time psychical and collective, that is to say, we cannot talk about individual but only about individuation. Kurt Lewin sees the social psychological individuation as a process in which an individual moves towards a certain goal by overcoming the resistance produced by its milieu as one sees in a field. Simondon doesn’t identify an opposition between two opposing forces, instead, he seems an immanent tension as the condition of individuation.

Simondon (2005) gives a visual metaphor of individuation, which is the crystallisation process of supersaturated solutions. During the crystallisation, tensions of different intensities are everywhere in the solution and they have to be resolved in favour of the propagation of energy. The tension is produced by the disparity (la disparation) of its constituents, that is to say a negative difference. Such a visual metaphor wouldn’t be sufficient to explain individuation, for it would be impossible to illustrate the individuation of living beings with an example of physical beings. The visual metaphor proposes to imagine an individuation process full of ruptures, tensions and quantum leaps. This differentiates itself from the common sense of what an individual is, meaning a human being who can always internalize its exteriority or create an identity relying on the collective. This view isn’t sufficient to explain individuation, a new language has to be developed.

§2. Antagonism and a Negative Anthropology

It is within the psychic and collective individuation, we find the possibility of re-imagining a negative anthropology. The term negative anthropology is proposed by the activists collective Tiqqun in L’Introduction à la guerre Civile(2006), in which they see confrontation and hostility as the necessary condition of a community. The production of form can be resulted from the resolution of tensions, but the repetition or imitation of forms can become mechanical, typological. Harmony is the repetition of a static form by reducing all the possibility of confrontation. In fact such a community of harmony doesn’t exist; even if it exists, it by no means bears a single sense of what we understand as community- la commune. Here we discovered two kinds of harmony, one enforced by the state as the highest principle of developments and patriotism; one comes from anthropological imaginations of a communal harmony which is facing its own decline. These two kinds of harmony are sometimes in conflicts with each other, and sometimes they come together hand in hand, the latter as we can see in Hong Kong, always merge and manifest in empty axioms: “peace, reason and non-violence”.

The problem with axioms is that they are always right, but they are poor of processes. The axioms necessarily constitute forms, and it is exactly what we observed during the Choi Yuen village protest(Lo Chun Yip- Days After N Coming ), or any confrontation between protesters and the government, it is not difficult to find out that antagonism is always undermined, while an imaginary future which doesn’t belong to anyone (not even the capitalists) become the Raison d’État. In these pacifications, we confront the poverty of form: emptiness, substance-less, and staticity. In order to exit such a situation, firstly one should reject harmony as default of communities, and the common believe that modern society is the gradual destruction of a mythical origin of communities; secondly, individuation can never be fully actualized in stable forms, rather it must be metastable. Metastability is a term introduced by Simondon to designate the constant individuation and repetition. This also suggests that tension can never be fully resolved, they always manifest in new formats.

How could we position art and artist in the process of individuation? As Bernard Stiegler showed in the opening quote, an artist is the exemplary of who individuates oneself by realising and exposing that the I is in the We, and the We is not outside the I. The artist individuates by using different apparatus, which we can see from the ancient craftsmen to today’s conceptual artists. We must also recognize that in the individuation of the self, there is also a We in him, which is never fully himself, the artist individuates himself at the same time individuate others. Such process of co-individuation was clearly present in Plato’s dialogues, where Socrates co-individuates with his interrogator through conflictual arguments. We find always in the dialogues the dramatical gestures and performative effects, for example in Symposium, the drunken Alchibiades entered the scene and confessed his love to Socrates. To retrieve (wiederholen in Heideggerian sense) the meaning of individuation, is necessarily an artistic act. As Wittgenstein (2003: §19) says to “imagine(vorstellen) a language is to imagine a form of life(Lebensform)”, the opposite is true that in order to imagine a form of life, it is necessary to reinvent a language, not necessarily one totally anew, but from the existing one. It is exactly at this point we find the connection between artists and living as form through his role in the psychic and collective individuation.

Artists are not the author of individuations, but rather those who facilitate individuation like catalysts in chemical reactions. A catalyst is not an author, and it would be wrong to attribute a chemical reaction to its catalyst. Artists are those who recognize these confrontation and to transform them to a necessary and positive ones. This reminds me always of making one’s life a work of art proposed by Michel Foucault. We have to remind ourselves that this proposition of Foucault was influenced very much by the historian and philosopher Pierre Hadot. Hadot’s works on the spiritual practices in Hellenic and Roman history rediscovered philosophy as a way of life (la philosophie comme mode de vie). Here we may be able to assign the first philosophical question common to both occidental and oriental culture: take care of yourself. Foucault(2001)tried to show, in his reading of Plato’s Alcibiades, that taking care of the self is necessarily taking care of others. This brings us back to the psychic and collective individuation, for no individuation is possible without fulfilling both dimension. Once it fails, it leads to dis-individuation, meaning the self-destruction of the psychical apparatus, the “dis-individual” loses the ability to love (philia), like those who threw sulphuric acid to the over-crowded street in Hong Kong.

What would be this collective, if it is not an abstract term? The collective is only possible if we think in terms of the touchable bodies, desires, eros. Living is by no means a bare life, or matter, but forms of life, that affects each other, and confront each other. Eating organic food can be a contribution to an abstract collectivity by thinking that I am already contributing to the well being of human kind, but in fact, it is totally absorbed as a life style: the highest manifestation of consumerism. The collective is always the present which is forgotten in the capitalistic temporal structure. In anticipation of the future- money, power, sex, etc – we are actually nowhere but speeding toward a bitter future if not a destructive one. We can find the anamnesis by re-organizing aesthetic experiences, that is also to say by the re/distribution of the sensibles. During the Occupy Central movement, the occupation movement at the ground floor of the HSBC Headquarter, one of the main ideas is to allow people to enter freely, and experience two forms of life created by the inside and the outside, that is to say exposing the contradictions and antagonism and the forgetting of the present in order to re-constitute a collective.

Living is to individuate oneself and others. To individuate is at the same time to invest in terms of time, desire and love. I reproach the concept of form in order to show that it is necessary to politicize the very notion of “form”, also Simondon’s theory of individuation. Forms are delicate in repetition, we are not able to assert that whether it is that we lose sensitivity to forms or forms lose senses in their repetitions. When I was in the 7th Berlin Biennale, I was shocked by their imitation of an occupation movement inside a gallery: one that makes resistance a performance and renders it impotent by its pretentious gestures and flamboyant slogans. It is necessary for us to reflect on a negative anthropology in order to reach a more profound resistance today. To make one’s life a work of art, is not simply to become an Oscars Wilds type of Dandy but rather to dispossess oneself- this suggests a re-constitution of community. And art, seems to me is one of the best medium to render visible and sensible the contradictions and antagonism in our quotidian life, and serves as a catalyst that speeds up/slow down the pace and radicalise the process of individuation.

[vi] Pierre Hadot主張以哲學為生活方式，著有Philosophy as a way of life。